For information on the project or to contact the coordinators please email lecheile09@gmail.com
No comments:

Steffan Jones-Hughes from the Regional Print Centre in Wrexham, and Jeanette Orrell, both visual artists based in Denbighshire, visit Ireland on a CCAT Interreg Go and See grant from Aberystwyth Arts Centre to look at making connections with arts organisations and artists in Ireland. One of the first people to get in touch is Lucina Russell, Arts Officer for County Kildare, who makes the connection with Leinster Printmaking Studio and Margaret Becker. They arrange to meet and discuss the possibility of developing a collaborative project between Welsh and Irish printmakers. After the initial Interreg funded visit to Ireland a group was established to try to raise funds for more exchange.

Members of Leinster Printmaking Studio contact Steffan Jones-Hughes with a view to taking the project forward. Monica de Bath, Irish Project Coordinator, secures CCAT funding from Temple Bar to enable a visit over to Wales. Monica de Bath, Eilish McCann, Alison Craig, Jane Copeman, and Steffan Jones-Hughes meet at Galeri in Caernarfon. The project begins to take shape. A formal initiation process takes place where artists from Wales are linked to artists from Ireland and told to “communicate and see what happens!”

As a result of taking part in a residency at the Regional Print Centre, Yale College, Wrexham, Australian artist Veronica Calarco becomes involved in the project. Linda Davies, Alison Craig and Veronica visit Ireland. They visit the Leinster Printmaking Studio, (L.P.S.) for an afternoon of discussion with about 10 interested prospective participants. This is followed by a visit to the home of Leinster Printmaking Studio member Una Collins, who provides a warm reception. The next day they visit Monica de Bath’s studio.

Discussions are followed by exchange visits between artists from both studios.

One of the artists involved, Alison Craig, had been a part of our Professional Printmakers Programme at the Regional Print Centre. She takes on the role of project coordinator from the Welsh side. Alison works initially in partnership with Steffan, and latterly more on her own, to develop funding applications and exhibition opportunities. The project successfully secures funding from Wales Arts International and a-n magazine.

Diana Williams and Eirian Llwyd visit Ireland as a result of the WAI funding. The project is included in the Regional Print Centre publication, International Projects 2002-2007

A group of Welsh artists, Steffan Jones-Hughes, Jeanette Orrell, Andrew Smith, Linda Davies and Alison Craig travel to Ireland and visit the Leinster Printmaking Studio. They meet and discuss the project with the Irish artists and Geraldine O’Reilly, artist & printmaker, who had acted as curator at the beginning of the project thanks to CCAT Interreg Temple Bar funding secured by Monica de Bath. A number of visits are made by the Welsh artists to the Graphic Studio Gallery, the Original Print Gallery, Rubicon Gallery, Gallery of Photography, Irish Museum of Modern Art, & National Museum of Ireland. During this period a number of workshops take place at the two print studios to enable artists to meet and explore their ideas.

A publication is produced in Ireland to promote the project. This is funded by a combination of sources including CCAT.

An exhibition of work in progress is held at the Riverbank Arts Centre, Newbridge, County Kildare, and the publication is launched. Andrew Smith and Alison Craig return to Ireland with work for the exhibition. This exhibition is made possible through the support of Lucina Russell, Arts Officer for County Kildare, who opens the exhibition and who had helped to broker the initial relationship between the two studios. Monica de Bath gives a welcoming talk in Irish and English, and Alison Craig responds (in English) for the Wales-based artists with Diana Williams providing an on-the-spot translation into Welsh. Musicians playing traditional Irish music complement the opening evening. The following day, groups of local schoolchildren visit the exhibition and hear an informal talk by the artists Eileen Keane and Linda Davies, from Ireland and Wales respectively. Pamela de Brí takes part in an interview on RTÉ Raidió na Gaeltachta

A blog is set up on a-n (artists’ newsletter) website

Veronica Calarco applies for the exhibition to be part of Country Arts South Australia touring exhibition programme. Following Veronica’s proposal the project is selected as the international component of the 2009/10 Country Arts touring programme. Over a period of 18 months, from June 2009 until December 2010, the project will be viewed in over 15 Galleries in South Australia.

Completed prints from the project are shown at the Graphic Studio Gallery, Dublin. This is as a result of connections made by Margaret Becker, who is also a member of the Graphic Studio. The exhibition is selected by manager, and renowned printmaker, Robert Russell and Catherine O' Riordan. This exhibition represents a summary of the project as it stands and provides a focus for reflection and evaluation. Alison Craig, Pamela de Brí and Graphic Studio member Liam O Broin all give “Artist Talks” at the opening. A transcript of Liam’s speech can be found on the Dublin Graphic Studio Gallery website. An article appeared in Golwg (Welsh Current Affairs Magazine) featuring Eirian Llwyd and Diana Williams. Pamela de Brí is invited onto the panel of Imeall on TG4 - Irish language television channel, and the project is featured on that programme. It is also included in the Irish Arts Review.

There is an exhibition at the Alternative Entertainment Arts Centre, Tallaght, Co Dublin.

A catalogue of the Australian exhibition, prepared and designed by Veronica Calarco, is launched.

Pamela de Brí travels to Wales in August to meet Veronica Calarco, while she is on a visit. Alison Craig meets Pamela and they travel together to meet Veronica and Jane Copeman at Andrew Smith's house in Harlech. Alison also takes Pamela to the Eisteddfod in Bala where they meet Diana Williams. The following day Ian Williams meets Pamela and Alison at Alison's house. A project specific blogspot is established by Pamela de Brí to showcase the artists involved in the project. Much of the information on the artists is drawn from the catalogue compiled by Veronica for the Country Arts S.A. touring exhibitions.

A residential organized by Alison Craig takes place at Nant Gwrtheryn. Four artists from Ireland and six from Wales meet for 4 days and work intensely, bringing the project to the next stage.

The Le Chéile project opens in the prestigious New Land Gallery, Port Adelaide on 27th Nov and continues there until January 17th 2010. Celtic band, Blind Mary, play and the opening is well attended and highly praised. Other galleries are now taking an interest. 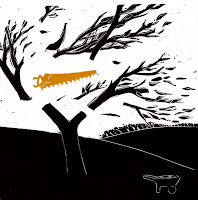 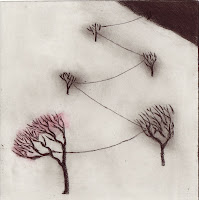 I lived in rural Mid Wales for twenty five years and now live on the boarders of Powys. The Welsh landscape has always been part of my work both in sculpture and print. I have recently begun to make prints based on imaginary fairy tales and myths. Myths and legends are a universal language and belong to everyone. I am hoping to make links with Welsh and Irish traditional stories inorder to inform my work.

I think of landscape in terms of space, as a backdrop, an arena or a stage. Within this arena an imaginary protagonist could be enacting a solitary drama. The protagonist could be present in the form of an animal, person or tree, or absent with the stage empty. The beginning and end of the narrative are not important for the work, although sometimes I construct a series of images that could be set in sequence. The work is about quietness, solitude and absence. 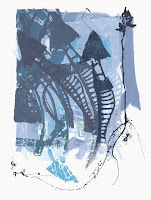 I first became interested in the project after visiting the exhibition ' Le Cheile' at Rhyl Arts Centrein January this year.
The exhibition really made me think about communication through images.
I like to receive things by post, especially when the envelopes or parcels have been decorated in some way.
Seeing this combination of print and how it can be used to layer and layer between artists is something that I would like to investigate .
Looking at the images develop into finished pieces.
My work recently has revolved around routes and roots and multi layers of colour using the screen. I have been experimenting with alternative surfaces to print onto in particular clay and fired tiles.
The images above are all screen prints
No comments:
Artists Artists, Submissions from New Artists
Older Posts Home
Subscribe to: Posts (Atom)